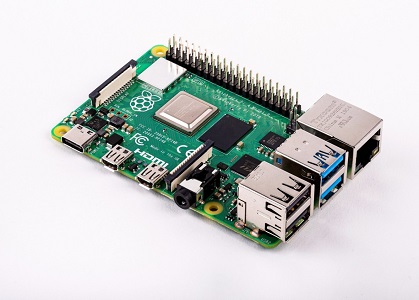 In June, the latest edition of the microcomputer colloquially called “raspberry” – Raspberry Pi 4 went on sale. The computer (basically the motherboard) is equipped with a Broadcom BCM2711 processor with VideoCore VI graphics.

The processor is a quad-core 64-bit unit clocked at 1.5 GHz made in ARM v8 architecture with Cortex-A72 cores. Depending on the variant, the computer will be equipped with 1, 2 or 4 GB of LPDD4 SDRAM memory. The Raspberry Pi 4 should be two to four times more efficient than the 3B version. It is equipped with two micro HDMI outputs that can send a 4k 60Hz image. It is equipped with HEVC decoder and supports OpenGL ES 3.x libraries.

In terms of network controllers, we have Wi-Fi Dual-band 802.11ac, bluetooth 5.0 and Gigabit Ethernet available. Four USB ports are available to users, two 2.0 and two 3.0 . A 5V / 3A power supply with a USB type C plug is required for power supply. Due to the changed connector layout, it was necessary to develop a new housing.