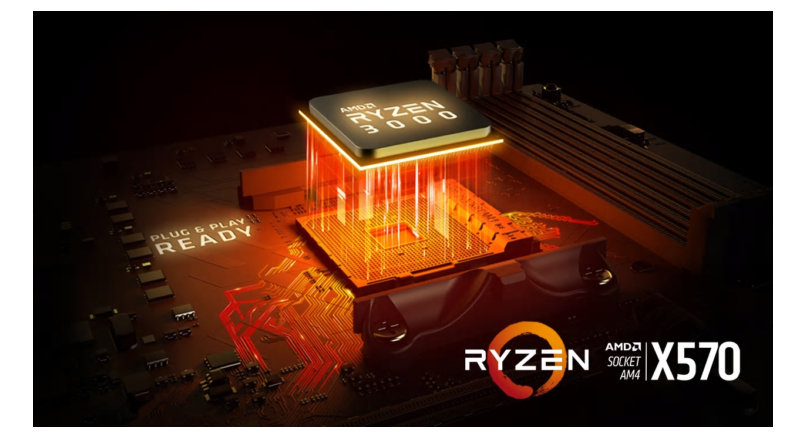 This year, new AMD Ryzen processors debuted, the third series based on Zen2 architecture. The processors were warmly received because they turned out to offer better performance. Although the processors are supported by older B350, B450, X370 and X470 chipsets, a new X570 chipset has appeared.

The chipset was developed by AMD alone this time. Its biggest new feature is PCI Express version 4.0 support. At the moment, there are not many graphics cards and SSDs using the new interface, and those that are not offer a significant increase in performance, but this state of affairs will definitely change over time. This is a mITX format board. It is equipped with a strong VRM section in 8 + 2 format, which will meet the most powerful units of the Ryzen family. Like most X570 boards, it is actively cooled, in this case with two small fans. It happens with the Asus ROG series, the price is not small and amounts to around 250$. The mITX format board has two memory slots and a PCI-Express 4.0 x16 graphics card slot. It is equipped with an M.2-2280 (PCI-Express 4.0 x4) connector and four SATA 6 Gb / s ports. 2.4 Gb / s 802.11ax WLAN, Bluetooth 5.0 and 1 GbE modules are used for network connectivity. The VRM section is built in a 6 + 2 phase configuration. A large heat sink is used to cool the chipset and there are no fans here. The sound system is similar to the Asus Realtek ALC1220. The rear panel has an HDMI connector, DisplayPort input, two USB 3.2 Gen1, two USB 3.2 Gen2 type A, one USB 3.2 Gen2 type C. The board also offers Thunderbolt 40 Gbps connectivity via USB-C. We also have an RJ45 socket, PS2 and two WiFi antenna connectors. AsRock has equipped its board with a set of audio outputs and inputs, including an optical SPDIF output.

The motherboard costs about 230$. The next mITX board, just like the representatives above, is equipped with two DDR4 DIMM memory banks, a PCI-Express x16 connector, as well as four SATA 6 Gb / s sockets. It offers two M.2 x4 sockets, the Realtek ALC1220-VB sound system as well as an Intel GbE LAN network card and wireless Wi-Fi 6 (802.11ax). There is an 8 phase VRM section. This is one of the few representatives of mATX boards. The board has a solid 10 phase VRM section. There are four banks on the laminate for RAM, in which modules with a total capacity of 128 GB and clocking up to 4200 MHz can be filled. We have two PCIE 4.0 x16 sockets (electric x16 and x4), one PCIE 4.0 x1 connector and one M.2 Key E for installing the wireless communication module. Eight SATA 6 Gb / s ports and two M.2 Key M (Gen4 x4) ports are used to support storage media. The ASRock board also has leads for connecting LED strips, five fan connectors, a Thunderbolt AIC port, four USB 2.0 ports and two USB 3.2 Gen1. It is equipped with the Realtek ALC1200 sound system and the Intel I211AT network card. The chipset is cooled by means of a fan.

The board can be bought from around 170$.

This is the second micro ATX format board. The board has a very poor VRM section, which in addition does not have any heat sink, which must be taken into account when overclocking the CPU. The manufacturer declares that his board can easily work with Ryzen chips with a TDP up to 105 W. X570GT has four banks for DDR4 RAM, in which you can plant modules with a total capacity of 128 GB and clock speed up to 4000 MHz. There is one PCIE 4.0 x16 and two PCIE 3.0 x1 connectors on the laminate. We also have four SATA 6 Gb / s ports and one M.2 Key M PCIE 4.0 x4 slot. The board is equipped with the Realtek ALC887 sound system and the Realtek RTL8111H network system.

The board costs about 190$, but it is also the most difficult to access. Biostar products are not very popular.

The X570 chipset is the top chipset on AMD systems and is mainly found in ATX format. The above boards are the only representatives of the mITX and mATX segment that I found. Unfortunately, there is a tendency that boards are becoming more expensive and the equipment does not go with it. Digital SPDIF output is now rare, as are the four audio jack outputs.

Motherboard manufacturers take advantage of the unpopularity of mITX boards and push prices up. This makes the board, which is smaller than the standard ATX boards and worse equipped, costs more instead of less, because the production cost is certainly lower.

Personally, assembling a set with an AMD processor I would buy a board with the B450 chipset. Currently, the PCI-E 4.0 capabilities will remain unused. If you are planning a larger enclosure, it is worth leaning towards mATX and even ATX boards. We will have more expansion options, and the disc will be cheaper.