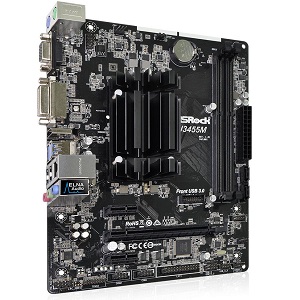 Recently, I spent some time on a small review of htpc cases, today it’s time to go a step further and think about the selection of components for our dream equipment.

Our goal is to set a future-proof set that supports 4k resolution with a frequency of 60 Hz and the mini ITX motherboard format, due to the fact that such a board can be installed in any case, also large.

If someone cares only for full HD and does not need it, then even a few years old processor will be good. We can then buy the cheapest motherboard, e.g. Biostar J3160NH with a Celeron J3160 processor. Such a board with an integrated processor costs only 100$.

Support for video playback in 4k resolution with a frequency of 60 Hz requires HDMI version 2.0. The problem is that the graphics chips currently produced (as well as earlier) Intel processors, even those from the Coffee Lake series only support HDMI version 1.4. Motherboards with a DisplayPort to HDMI 2.0 LSPCon converter are the solution to this problem. There are not many such board and they are top level, so they are expensive. The mini ITX boards themselves are also not the cheapest and manufacturers do not have many models on offer.

From Intel motherboards with HDMI 2.0 support we can find ASRock Z370 Gaming-ITX / ac and Gigabyte Z390 I AORUS PRO WIFI models. These are top boards with the highest chipsets and cost around 200$. Maybe someone will be able to find cheaper previous Gigabyte H370N WiFi and Z370N WiFi models, these boards also support HDMI 2.0 and they are currently unavailable . If someone does not care about HDMI 2.0 then they can afford any cheapest even motherboard with H310 chipset.

Choosing a processor is less of a problem than a motherboard. For video playback we don’t need powerful and expensive Core i5 or i7 processors. All you need is a core i3 8100 or 9100 or even a cheap G5400 pentium. A good choice will be versions with the letter T, e.g. i3 9100T, i.e. more energy-efficient, with reduced to 35W TDP. However, they are less available and more expensive, so regular versions will also be a good choice. Recently, processors have also appeared with the letter F. These are versions without a integrated graphic unit, and we care about it, because we want to avoid an additional graphics card, so they should be avoided.

Intel processors are fully supported on both windows and linux. They support all necessary video codecs including HEVC 10 bit. They also support netflix 4k.

In the case of AMD, we will choose from new generation processors from the ryzen series based on the new zen architecture. AMD motherboards and processors support HDMI 2.0, so it’s theoretically easier here. It is worse, however, with the choice of mITX motherboards. There are very few motherboards. We can recommend, for example, ASRock Fatal1ty B450 Gaming-ITX / ac.

For this we choose a processor with an integrated graphics card, so models with the letter G at the end. GE models are also energy-saving. We have a choice of two core Athlon processors with four threads with a vega 3 graphics unit. These are the Athlon 200GE, 2200GE and 240GE models. They different only in frequency, so each of them will work for our applications. They all have a 35W TDP.

We wrote about them here.

AMD APU is officially supported under Windows, but PlayReady 3.0 and netflix in 4k doesn’t work. Under Linux, there is no official AMD driver, only one is open source. Until recently, its was many issues under linux, now it is better, but it is not without problems as in the case of the Intel platform.

Since we mention Intel and AMD GPU support, it is worth mentioning what it looks like with nvidia cards. Nvidia cards are fully supported on windows. Netflix 4k, however, does not work on the cheapest and theoretically best for HTPC GT 1030 (GTX 1050 and above needed). Until recently, nvidia Linux drivers were good but VDPAU is already several years old and is not developed. It lacks HEVC 10 bit support.

What should you choose then?

It is a difficult question. I would, however, choose the Intel platform with the HDMI 2.0 board. Intel processors are best supported. Netflix works, everything works very well on Linux. And linux is not just linux, because libreelec and its derivatives are based on Linux.

HTPC is not so demanding hardware, so the amount of framework to operate is not large. 4GB is enough, but for peace and better performance I suggest 8GB of RAM.

There is freedom here, but at least a small SSD for the system will be a good choice. It will provide us with a quick start and will be silent. HDD will still be cheaper for data storage, and if we store 4k materials, some space will be needed.

Optical drives are displaced and will be useful mainly for lovers of movies on blu-ray discs.

The last thing, but not the least important is the power supply. It is he who will provide the necessary power to our components. The choice of power supply depends on our components and the case. A standard ATX power supply will not fit into small cases. Some SFF enclosures are adapted to smaller SFX power supplies. In addition, ATX power supplies have fans, and this causes additional noise. Passive and semi-passive power supplies are also available. If we have a large case, powerful core i7 processor and a discrete graphics card, e.g. RTX 2070, we have to install a decent ATX power supply. If we have a processor such as the core i3 9100 selected by us without a discrete graphics card, the expected power consumption will be within 20-60W, and for that we can use a small passive nano / pico power supply with an external charger. Personally, I have a Streacom Nano 160W power supply and I can recommend it to everyone with a clear conscience.

You can also buy some cheaper replacements for pico power supplies on aliexpress, but I don’t know what quality they are.

In this article I wanted to present a few things about what to follow and what to choose when building modern HTPC. Personally, I already have a few years of Core i3 4130T on a Gigabyte GA-B85M-HD3 R4 board with a 160W Nano power supply and the everythings works well by charging a small amount of current. The equipment was selected a few years ago for Full HD resolution. Today I would choose the core i3 9100 and the Gigabyte Z390 I AORUS PRO WIFI board. This set will ensure trouble-free entertainment in 4k resolution. A great choice would be APU from AMD, but in this case they do not demand drivers that AMD has always dealt with, especially in the linux version.