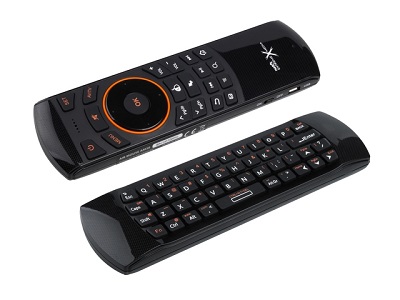 In today’s article, we’ll look at available ways to control your computer. Usually, a traditional computer keyboard and mouse are used to control the computer. These accessories work well at the desk, having a stable support on the countertop at all times. Watching a movie in the living room we have a different situation. Most often we sit on a couch or large couch corner and we only have a coffee table at our disposal. Then operating the keyboard and mouse becomes uncomfortable. A special keyboard or remote control would be useful, as for a TV. Today we will look at such equipment.

With the spread of smart TV and allow the use of the Internet through the tv, there was a need for multimedia keyboards that are a combination of a keyboard with a touchpad known from laptops in order to replace the mouse. Such keyboards have smaller dimensions than traditional ones and in place of the numeric keyboard we have a touchpad. With the help of such a keyboard you can conveniently browse the internet. This keyboard also allows us to freely use all HTPC functions. The remote control will work better for controlling the video player, but it will not give us such control over our equipment as the keyboard.

Many manufacturers offer such keyboards. Perhaps the most widespread and affordable are Microsoft All in One and Logitech K400.

This is an even newer device. It is such a “magic wand” acting as a mouse. A gyroscopic device that moves the screen cursor with the help of hand movements. On the reverse, it usually has a keyboard that makes it easier to navigate the websites.

Media center remotes had one big drawback for me. They could not turn on the already turned off computer. The recipe for this are complicated remote controls that turned on the computer after it was permanently turned off. IMON remote controls, which are no longer available on the market, could do that. Imon also appeared in versions with LCD and VDF displays, displaying on a small screen e.g. a song artist.

Imon was doing great, configuration in linux is a bit more difficult, but the remote control worked correctly. Unfortunately, the device is no longer available and you need to look for other solutions. Flirc SE comes to the rescue. It is a transmitter for a universal remote control. I use it with Logitech Harmony remote and the whole works great. I can’t imagine any other HTPC operating.

This article presents various methods of controlling multimedia content. Probably everyone will choose something different, but this short article will highlight at least what we have possibilities. I have been using the Logitech Harmony remote for many years. Previously model 785, currently model 900. New models with touch screens are not convincing me yet. I appreciate the ability to control everything with one remote control. It was important to me that the remote control must start the computer off. Flirc SE and Logitech Harmony do it very well and are easily configurable. In addition, if I need to use a browser or other programs than kodi (linux system), then the Microsoft All in One keyboard comes in handy.