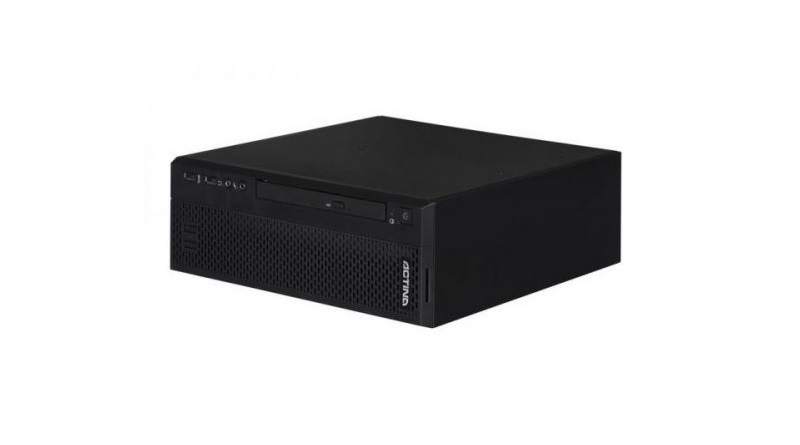 I was prompted to write this article by the first comment on the site that I recommended expensive motherboard.

The idea of that article was to build HTPC without compromise, to run all videos available on the market. Today we will focus with the other pole, the equipment as cheap as possible, but run 4k video with 30 fps, which is provided by HDMI 1.4. Personally, I have several years of HTPC with a core i3 4130T processor and I was surprised, but it plays UHD movies smoothly in MKV format encoded with HEVC codec. The HDMI 1.4 limitation is 4k resolution at 30 fps. Cinema films are still recorded in 24 fps. The problem will be videos from go pro cams in 4k 60 fps resolution. However, not everyone needs it.

The cheapest option is to buy a used mini PC

The cheapest option is to buy a used mini PC, e.g. with intel Haswell processors. All you need is a core i3 processor and 8 GB of RAM. In fact, even 4GB of memory is enough, but it’s better to have a spare. It can be e.g. HP ELITE 800 G1 USFF or Lenovo M73 SFF. I do not know if at this price you can manage to assemble something yourself.

The disadvantage of this solution is that it is used equipment, most likely after office leasing, so he has already worked some hours.

The more expensive option – building your own HTPC

It is a better option, because new equipment and newer processors have better codec support in higher resolution. In addition, we build something ourselves. I will recommend something from the Intel and Amd platforms.

First, we choose the housing. I chose Actina Advance L8, due to the external dimensions – I was limited by furniture. The second thing that I needed was a case that could fit my mATX board, and this also fit mATX format boards.

It is a SFF (Small Form Factor) case and will fit mITX and mATX boards. However, smaller boards in mITX format are recommended. There is space for a power supply in SFX format and for an ultra slim optical drive with a height of 9.5 mm. Unfortunately, my current blu-ray drive is 12.7 mm high and does not fit. We also have space for a 3.5″ HDD, which is oddly foreseen to be mounted upside down. I did not like it and I converted the bay to make it fit normally. There is some space for a 2.5″ disk, but the mounting holes do not match. After drilling a new 2.5 “disk, it works flawlessly. Housing you matter of taste and everyone will surely find something suitable for themselves. It costs about 50$.

If we are next to the housing, we must choose a power supply. SFX power supplies are less popular than ATX, but there are several models from well-known companies such as Chiftec or Seasonic. A good choice would be, for example, SeaSonic SSP-300SFB 300W for around 50$. Instead of the SFX power supply, we can choose a pico PSU power supply, which will save valuable space in the housing. This will be the case when buying from Aliexpress, there we will find something for $ 30-40.

With the Intel platform, a reasonable choice for budget HTPC will be a two-core, four-thread Pentium G5400 processor. We will buy it for around 65$. You will need a motherboard for this. We decide on the mITX format to give more freedom in choosing a housing. Gigabyte H310N 2.0 will be a cheap and sufficient motherboard. The album costs about 100$.

With the AMD platform, the cheapest Athlon 200GE is enough. Like the G5400 it is a two-core and four-thread processor, but its TDP has only 35W. It costs about 75$. Unfortunately, with mITX formats on the AMD platform is even worse than in the case of Intel. there are fewer and more expensive ones. HTPC has small requirements, so probably the cheapest ASRock AB350 ITX / AC Gaming is enough for us.

The board is more expensive than the equivalent with the Intel chipset and costs about 120$, so 20$ more. The advantage is that the board is better equipped than the proposal for Intel, for WiFi and more audio outputs.

In terms of price, the Intel platform is cheaper and has better support from the drivers side, so for our HTPC we choose G5400 on the Gigabyte H310N 2.0 motherboard. The AMD platform is not fully supported under linux and under netflix 4k is still not supported.

We can assume passive cooling for both processors, e.g. Arctic Alpine 11 Passive for Intel processors and Arctic Alpine AM4 for AMD platform. These cooling devices support processors up to TDP 35W. The G5400 has more than that, but cooling can handle it.

The choice of disk depends on the user’s needs and needs. Is HTPC to serve as a data warehouse or does it have access to the NAS? We accept a 120 GB SSD for the system and a small amount of data. We choose the ADATA SU650 120GB drive. Its price is about 25$.

There is still a choice of memory. Both platforms support DDR4 memory. HTPC will not have demanding tasks and memory speed will not have a great impact on the operation of the system, so you can safely be satisfied with DDR4 2133 MHz or 2400 MHz memory. As for the amount, even 4 GB will be enough, although personally I would prefer to have 8 GB. Memory is not expensive 4 GB will cost about 25$, and 8 GB we will buy for 50$.

Time to sum up the costs:

If you want to build HTPC on new 4k subassemblies, you don’t have to spend a fortune. A modern set that sends a nice couple of years can be built for around 290 – 320$.

Despite the curiosity, the new APU from AMD due to poor manufacturer support and not very attractive prices compared to Intel products, I would personally stay at the Intel platform.

The announced new Intel graphics processors will finally have native HDMI 2.0 support. The question remains as to the prices, because, unfortunately, we see a tendency to increase them, especially with motherboards, which can be seen especially after the release of the AMD X570 chipset, where prices start just below 250$.